“She has performed as Dolly Parton in More Countries Worldwide than any other Dolly Parton Tribute Act and she is the choice of most Major Brands around the world, when Dolly is unavailable”

Sarah Jayne’s reputation and performances are at the very top of the industry as a Tribute to Dolly Parton and is Britain’s Busiest Dolly.

In 2011 she performed for Dolly’s VIP guests at the 02 in London and MotorPoint Arena Sheffield for Dolly Partons “the Better Day tour” Performing for Norway’s Artic Equestrian games, Butlins Country and Western weekends, Corchevel – 1850, Klosters in Switzerland and The Red Cross annual Ball and many other prestigious events and corporate engagements.

She has performed on National TV with Dr Hook and worked on Stage, Theatre and Cruise liners along side The Bellamy Brothers, Frank Carson and many other fabulous personalities.

She has toured Europe and Worldwide including Spain, the Balearic’s and Germany, Scandinavia, India & Hong Kong, The Channel Islands, Orkney Islands, Ireland, Scotland, and Wales. Performing in Theatres, Manor houses, Mansions, Hotels and personal appearances. This show has a fabulous way of capturing your heart, Wonderful replica dresses and costumes from Las Vegas, England and Nashville’s “Country Tonight Show”

Sarah Jayne “I have been performing as Dolly for 22 years now.
I have worked at the 02 arena, on Dolly’s Better Day Tour as Dolly , for her VIP guests and I have had the pleasure of meeting Dolly Parton and Kenny Rogers professionally and personally”

Although I can and do work with bands I have found that with So many instruments used in each song its hard for a band to sound as authentic as the original, SO like my replica costumes I have spent time and money in finding the the very best Professional Musicians worldwide to make my backing tracks to my specifications.

I am known worldwide for my Tribute to Dolly Parton and my replica costumes,stunning wigs and mannerisms make my show unique and authentic.
The Dolly Parton Experience is a 1hr show and can feature Kenny Rogers Tribute (Andy Crust) making this option a 1hr and 20 minute show.
When performing with Kenny, a costume change from Dolly enhances the act and finishes on Country duets”

Dolly Parton’s Country Superstars, A Night at the Opry Dp’s Superstars is a celebration of Counrty Superstars for Today and Yesteryear including Patsy Cline, Johnny Cash,Billie Jo Spears, Willie Nelson,Tammy Wynette and John Devner to name a few all in full costume in their prime. The show is performed Sarah Jayne Europe’s Leading Tribute act to Dolly Parton as said by Kenny Rogers himself along with Andy Performing as Kenny she is also the Dolly Parton Tribute to work for Dolly on her world Tour meeting and greeting her V.I.P’s the Second impersonator in the show is Andy Crust who was named in the New York Times “Top Ten must see tributes before you Die” he is know as the Man with Many Voices and was named leading Kenny Rogers by Kenny too….There is no Lip Syncing or Miming!!! !

Dolly Parton – The Lady herself
“Thanks for all you do, wow fantastic”

Matty Jones – International Footballer
This act absolutely stole the show and was a huge talking point not only on the night but still today friends comment on how fabulous they both were! Sarah-Jayne singing alone was out of this world but Andy singing alongside her as Kenny Rogers was Perfect.
What an Amazing couple to work with, Fabulous Look, Outstanding Vocals, easy to deal with and will do anything to cater for your needs.

Anna Howell – Celebrity Journalist
Quite possibly the best tribute act in recent times. Sarah Jayne took the audience on a fantastic journey through the bursting career of the legendary Dolly, supported by an equally brilliant Kenny Rogers tribute act, Andy Crust.
Not only did they look every bit the part of their tributes, with authentic costumes and stage show, but the real proof came when they started to sing. Sarah Jayne has a voice so similar to Dolly Parton’s that if you closed your eyes you could easily be mistaken into thinking you were in the presence of the iconic country singer herself.

Richard Digance – UK TV Entertainer
“She’s got it all down to a T, And I have been to Dolly’s House”

Kate and Gino Caldesi – TV Chefs and Authors
“Thank you so much to Sarah-Jayne and Andy for a fabulous show. You made my birthday really special and personal, your voices were faultless and I keep receiving messages of thanks from my guests saying how great you two were. You really made my night.”

Makayla Fred, Canadian Show Critic
I have NEVER heard another impersonator sound SO MUCH like Dolly both in the singing AND talking. I thought you were lip syncing at first. AWESOME!!!!! 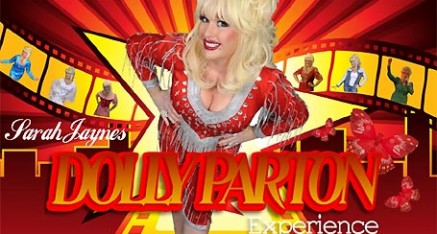 Enquire about, or book Sarah Jayne 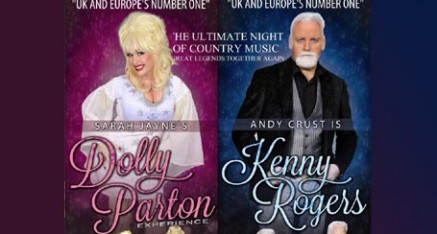