Cambiare Duo is made up of musicians Rachel Steadman and Jessica Cox. They met whilst studying for their music degrees at Colchester Institute and have been performing together ever since. They have worked on numerous tours worldwide in a variety of musical genres and have cruised South America and the Mediterranean.

Cambiare Duo presents a selection of music arranged for various combinations of violin, viola, cello and piano. Cambiare Duo delight audiences with music from Bach to the Beatles.

Rachel Steadman started learning the violin when she was six. She spent her early musical life in Cumbria before going on to study violin, viola and piano at the Colchester Institute of music specialising in performance. On attaining a first class honours degree she moved to London to study with Krysia Osostovicz at the Guildhall school of music and drama. Rachel now enjoys a busy and varied freelance career, based in London but traveling all over the world. Highlights have included; performing and recording with The Halle under Sir Mark Elder, touring Europe with the Australian composer JG Thirlwell, recording with pop artists such as Robbie Williams and playing in West end shows including Top Hat and Ghost.

Jessica Cox received a First Class Ba Hons degree in music before continuing her cello studies at the Royal Academy of Music. On graduating Jessica joined the Stanford Quartet whom performed for The Queen, worked with esteemed composer Harrison Birtwhistle and gave concerts worldwide.

She has performed for radio with the Northern Sinfonia, in Malaysia for Sadler’s Wells, toured with National Theatre of Scotland and has appeared in West end shows that include ‘A Little Night Music’, ‘Top Hat’ and the touring production ‘Three Phantoms.’

She has performed with numerous artists on BBC radio and television and highlights include appearing with The Hoff on ITV, Goldfrap on Jools Holland and recording for numerous adverts. She is a founding member of an exciting new electric/acoustic group ‘Q strings’ and has toured and arranged music for The Specials, Brian Wilson and Gilbert O’Sullivan. Most recently she has been performing live and on television with Ellie Goulding . 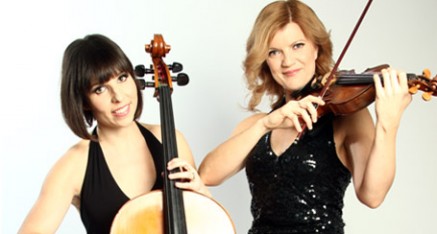 Enquire about, or book Cambiare Duo