….dynamic guitar and flute duo that offers shows with pace, style and class, their intimate and scintillating stage interaction introduces you to musical influences that include, Celtic, Spanish, Flamenco, Gypsy, Latin pop and rock rhythms…..

Sam studied classical guitar then established himself as a successful and much sought after solo performer along with forming popular ensembles, playing a very wide range of musical styles. He is a prolific composer and arranger with songs for stage, BBC Radio themes and a piece that became ‘record of the week’ on Lyric FM in Ireland. Sam has performed worldwide with audiences from very small concert halls to very large outdoor music festivals. He produced and directed the “Caramba” show, which was featured on BBC radio and was a big hit at the Edinburgh festival. Sam is also founder of the ever- popular “Easy Street” Celtic band, of which Louise Garner is a member.

Louise began playing at the age of five when her brother taught her the recorder, moving quickly through the whole recorder family she then, at eleven chose the flute as her preferred instrument. At that time she was also offered a dance scholarship but chose to follow a career in music. Early performances with the local youth orchestra enabled Louise to progress to solo and small ensemble work.

Together Sam and Louise have created “Aviva” an enormously popular and diverse cabaret show using the full house Orchestra or to tracks. Two different shows are offered based on the musical influences shown in the introduction above.

Enquire about, or book Aviva 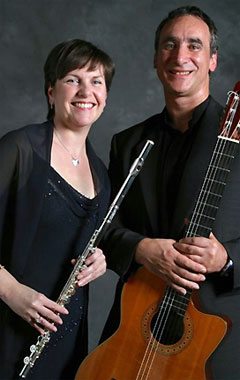