Currently residing in Barcelona, Spain and enjoying a truly international career as both a concert and recording artist, Jacob Cordover “impresses with his intuitive musicianship and impeccable technique” (Leicester Mercury, UK). His “consummate artistry” (Adelaide Advertiser, Australia) has enticed audiences in over a dozen countries across four continents.

Mr. Cordover has appeared as soloist with the Las Colinas Symphony, the Arlington Symphony, the Garland Symphony, the Orquestra Simfònica de Balears “Ciutat de Palma” and the Orchestra dell’Accademia “l’Ottocento”, and his performances have “demonstrated how much poetry and feeling can be obtained from the guitar in the hands of master musicians such as Jacob Cordover.” (The Mercury, Australia).

Comfortable performing a wide range of musical styles, critics have equally praised his performances of J.S. Bach and William Walton, saying “His interpretation of the Bach suite is one of the finest I have heard to date with superb phrasing and total mastery of the technicalities involved in playing this difficult composition” (Classical Guitar Magazine) and “This is simply the finest performance of Walton’s Bagatelles I’ve encountered. I and V crackle with energy, and he realizes perfectly the range of moods and colours in this modern masterpiece.” (American Record Guide).

As a recording artist, Mr. Cordover has released three solo CDs to much critical acclaim; Stélé (independent release, 2004) was hailed by Classical Guitar Magazine (UK) as “wonderfully sympathetic and highly accomplished… Cordover managing to get to the very soul of this striking and brilliant music.” His second solo release Blackwattle Caprices (Cala Records, 2013) received the following review in the American Record Guide: “His technique is flawless. His expression tasteful and always interesting and moving.” Mr. Cordover´s most recent release Expresivo (Cala Records, 2016) contains some of the most well-loved and well-known Spanish and Latin American works for guitar alongside arrangements of popular songs and works from the world of jazz. Included in the Critic’s Choice Best of 2016 from the American Record Guide, Expresivo came highly recommended – “Even if you already have these pieces in other performances, Cordover’s have such a distinct and attractive personality that it will be worth finding.”

Mr. Cordover has also released two CDs with his long standing chamber ensembles; Songs from the Forest, (independent release, 2012) the debut CD from the Australian Guitar Duo (with Rupert Boyd) and Historias (Cala Records, 2014) the debut CD from Zoco Duo (with Laura Karney, oboe/cor anglais). As well as receiving rave reviews, all of his CDs have been broadcast on radio stations in Asia, North America and Australia.

An interest in contemporary music, and with a strong belief that classical music should not be static and always backwards looking, has led Mr. Cordover to collaborate with a number of composers from Australia, Canada, Norway, Spain, the USA and the UK. He has premiered numerous works for solo guitar and guitar and oboe/cor anglais as well as a number of other chamber music combinations. Regular collaborations with the Association of Catalan Composers has led to a number of performances, and a live CD recording, of newly commissioned works as well as lesser known works by living composers for solo guitar and guitar and oboe/cor anglais.

Aside from his formative studies at the Australian National University School of Music with renowned performer and pedagogue Timothy Kain, he completed post-graduate studies at the Escola Superior de Música de Catalunya with Laura Young and at the Escola Luthier with Arnaldur Arnarson in Barcelona, Spain. He also studied 19th-century performance practice with Carlo Barone at the Academia l’Ottocento in Paris as well as taking several long-term residencies at the Banff Centre for the Arts in Canada. Masterclasses with Sérgio Assad, Manuel Barrueco, Ricardo Gallén, Paul O’Dette, Pavel Steidl, Geoffrey Simon, Geoffrey Lancaster, Nicholas Daniel, Edgar Meyer, Tsuyoshi Tsutsumi amongst others, have also been influential in the development of his playing. 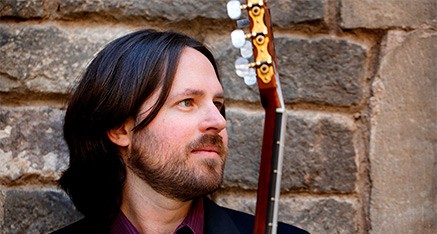 ENQUIRE ABOUT, OR BOOK JACOB CORDOVER